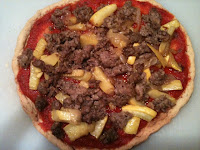 Having this pizza on the menu this week was a real treat. Cute Man isn’t a huge fan of the almond flour crusts, so I made his on two small flat breads he normally uses for his sandwiches. He was raving about it, so I think it’s safe to say he liked them. I used this recipe for the crust, but came up with the toppings myself based on what was on hand. Using the recommended parchment paper was the key to making this easy and week-night doable. The last time I made a pizza, the crust was super sticky and it was just an annoying process.

On to the toppings! I made a quick “sauce” with a small can of tomato paste, a bit of water, oregano, basil, salt, pepper, garlic powder, and a drop of Stevia. I kept it thick so it wouldn’t make the crust soggy. Atop the sauce, I lovingly placed some onions I had caramelized in grass fed butter for 45 minutes over low heat as well as the julienned yellow squash I had added to the onions for the last 5 minutes. Lastly, I topped this baby off with some defrosted crumbled sausage I had in the freezer. The combination was terrific! Oh, and I also sprinkled some Parmesan Cheese on top after I took the finished product out of the oven. That picture didn’t look as good so I went with the pre-cheese version.

Items like “Paleo Pizza” are a bit controversial among some. They see them as a crutch, keeping people from letting go of the modern foods that are just simply no good for us. That may be true, but I don’t think this makes me any more likely to go out and want the real deal again. Instead, these types of treats are fun to create and let me have a taste of a food that I really like and sometimes miss. Also, I have no illusions of doing this thing perfectly. I’m just doing the very best I can, making better choices whenever possible. The great thing is that my efforts are starting to show real results. The proof is in the (dairy free, grain free, omega 3-rich) pudding, my friend!
Posted by HEALTHY AMELIA at 4:25 PM