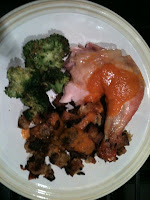 I had this bug in my ear about wanting to come up with a grain free stuffing worthy of Thanksgiving. When I saw this Paleo Bread recipe, I knew I was on to something. So, yesterday, I baked up a loaf of bread and set about adapting my favorite cornbread recipe. I paired the creation with a delicious whole chicken, roasted broccoli, and topped it off with gravy (I added a dollup of tomato paste, an effect I liked). Here’s what I did for the stuffing:

2 tbs grass fed butter
2 onions, coarsely chopped
2 sprigs of fresh rosemary, chopped (sage is great instead, but I didn’t have any)
1 egg
¼ c milk of choice (heavy cream, coconut milk…)
¼ c chicken broth
Salt and pepper to taste
Paleo Bread, cubed (I made mine with butter instead of coconut oil)

Preheat oven to 375*. Because I’m lazy very efficient, I do this all in one oven-safe casserole pan. On the stovetop, melt butter and add onions, cooking on low heat for 30 minutes or so until they caramelize. Add in the rosemary and stir. In a bowl, combine the egg, milk, chicken broth, salt and pepper and set aside. Mix the cubed bread in with the onions and then pour the egg mixture on top. Stir the stuffing just a bit to combine but not too much, which would cause your bread cubes to get mushy and break apart. Put the pan in the preheated oven and cook for 30 minutes until the stuffing is crispy on top. Try not to eat half of it before your husband comes home (or is that just me?)
Posted by HEALTHY AMELIA at 5:54 PM