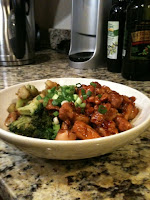 This is a winner! I discovered this gem of a recipe on Holly's meal plan. As soon as I saw it, I just had to have it. Like, now. It took me a few days to make it back to the store to get the ingredients, but I managed to get it done. I'm so happy Holly followed up with me to let me know to add some honey to the sauce. It was essential! The finished product was better than ANY takeout I ever had (and thought I missed). Making the sauce with the juice of a couple fresh oranges plus their zest had the finished product singing with flavor. I always wondered why Orange Chicken was even called that. It never really seemed to taste anything like orange – more like a non-spicy version of General Tso’s. But this? This tasted orang-y in the best possible way. And it was just slightly spicy, enough to give it a kick but not too much (we’re not really spicy-hot people, at least when it comes to food!)

I served it up with some frozen broccoli that I first nuked, then finished up in the pan I used to brown the chicken (after I added the chicken to the sauce). I flavored it with some butter, chicken stock, and a splash of wheat-free soy sauce. Yum! The Cute Man added some of his favorite brown rice to the mix, but otherwise enjoyed this creation immensely, as I did. He declared it the best of my (often not-quite-successful) Chinese Food take-out recreation attempts. The whole bowl was finished off with some chopped scallions. They added a nice crunch.

If I ever get it together, I’m going to make a huge batch of this and freeze up some portions. Having this kind of thing on hand and ready would be awesome on a Friday night. It used to be that was the night we ordered takeout/delivery (Chinese or pizza). I now mostly cook something simple but I long for those lazy nights when I didn’t have to think about dinner once a week. And the flavor of Chinese food really takes me back there. Yum!

Email ThisBlogThis!Share to TwitterShare to FacebookShare to Pinterest
Labels: Paleo

Amelia! I am inspired by your success and commitment! Hussein and I want to learn more about Paleo - what is the essential starters book? xox

That is really great, Gwen! The quickest start would be to download the e-book I have listed on the "getting started with Paleo" page and on the upper right hand side. (full disclosure: I get a commission if people buy that from my link!) The great thing about that is that it's a practical guide - less theory, more practice. If you want a hard copy book, The Paleo Solution is the best. If you want to browse through info online for free www.marksdailyapple.com is an Amazing wealth of information. You could pretty much get the whole idea there alone. Please let me know what you think and ask me anything!