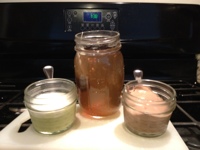 You'd think that keeping total carbs below 50 grams would completely nix the idea of treats. But where there's a will, there's a way! For the most part, I do shy away from sugar based as well as artificial sweeteners. But I've come to realize that a little can go a long way and that having a bit of a treat to look forward to does have a positive psychological benefit. I mostly use Stevia

to satisfy the sweet taste, but will also sometimes add a very small quantity of maple syrup, honey, or even regular sugar to things to give them a more authentic taste, without adding significant carbs (under 5g per serving does not bother me or spike cravings).

I should also mention that I've decided to stay mostly dairy free (except butter and ghee). As exciting as it was to think about eating cheese and heavy cream again, I realized that I'm better off without it and don't really miss it right now. I still deal with seasonal allergies which is a sign that my gut is still not completely healed. I suspect my inconsistency with dairy may be playing a part.

So far, I've come up with several treats that I've been enjoying all the while staying comfortably in ketosis. The first is this amazing recipe for Caramelized Coconut Chips from Melissa Joulwan. It is incredibly simple, fast, and more delicious than it has any right to be. Seriously, folks. I am addicted. It has the slightly crunchy appeal of popcorn with the additional saving grace of being super filling. I make it by the half cup and that is perfect for satisfying the snack monster without derailing my experiment. Win-win!

Second up is a crustless key lime pie recipe that I made in tiny 4oz jars subbing a dropperful of stevia for the honey. The dominant tart taste from the freshly squeezed key limes really made this turn out great even with only using the stevia.


My next attempt was chocolate mouse. I did use a tablespoon of maple syrup in edition to a few drops of stevia, to give it a more decadent taste. Keeping the portion small kept the amount of actual sugar eaten per sitting quite negligible. I made half the recipe linked above, and split it into 3 little jars. Using the top layer of cream from regular full fat coconut milk really makes this taste rich and the portion size turned out to be just right. I love how real, healthy fat like that in coconut, is so satisfying and self limiting. It's truly impossible for me to eat too much - a few bites and I've had enough. It's amazing! Another plus is that it really did take less than 5 minutes.


Another good one that hits the chocolate spot is the fat bomb. I'm still perfecting this one - I keep forgetting to add a bit of salt since I use unsalted ghee instead of the salted butter called for. I think that will round out the flavor. I am really looking forward to my new chocolate powder, cocoa butter, and vanilla I ordered. I am imagining all sorts of yumminess I can create with those! If I'm going to be this low carb, some quality ingredients DO make a big difference.

Last but not least, I made some homemade jello using Great Lakes Gelatin and brewed herbal tea, sweetened with a little stevia. Since the ingredients are all carb free and almost calorie free no less, I made these in larger jars. I made two each of orange and apple flavored teas. I'm always looking to get more gelatin in for joint health and gut healing, so this is a big win for me.


My first week of intentionally eating a ketogenic diet has been much easier and less stressful then I would have imagined. I think the transition was helped by the fact that I was really only going from a low carb (75-150 grams per day) diet to a very low carb diet (under 50 grams). Not being completely dependent on sugar to begin with made a big difference. However, as small a change as this may seem, I think it's a critical one for me. Keeping carbs at this level has completely evened out and stabilized my appetite as well as gotten rid of the intrusive cravings. Though by no means an "easy" lifestyle, it does feel sustainable for no other reason than it keeps food more in its rightful place instead of dominating my thoughts and life to a large extent as in the past. I am still the foodie I've always been, loving to cook, try new things, and share my creations with others. But I'm starting to feel more focused about it now that I feel like I'm running the show instead of my cravings.
Posted by HEALTHY AMELIA at 10:16 AM